At a recent EUCI conference on Public Utility Regulatory Policies Act (PURPA) reform in Denver, Colorado, it was clear among speakers and participants that technology and market circumstances have changed significantly since PURPA’s enactment in 1978. The changes in many parts of the country, the West Coast, East Coast, and part of the central United States, have been so profound that many of the states, utilities, and representatives in Congress are advocating for PURPA reform or abolishment. Considering the impact PURPA has had in helping diversify the fuel mix in electric generation and the penetration of grid-edge and utility-scale renewable energy, PURPA has been a resounding success, although not without some challenges along the way.

A review of PURPA's history

PURPA was enacted as a major piece of energy legislation at a time in US history when the United States was feeling the effects of oil embargos imposed by the Organization of the Petroleum Exporting Countries (OPEC). PURPA was intended to reduce US dependency on imported oil and spur advances in more efficient and cleaner electric-generating technologies. Founded in 1960, the five original OPEC members—Iran, Iraq, Kuwait, Saudi Arabia, and Venezuela—controlled much of the world’s oil production and reserves. The 15 OPEC member countries today are said to account for approximately 45 percent of total world oil production and more than 80 percent of world oil reserves.

Since PURPA, US dependency on imported oil has fallen dramatically, from a high of near 80 percent to approximately 25 percent today. Additionally, advances in energy-extraction techniques have provided a more stable and domestic supply of oil in the United States, reducing the impact any further supply disruptions might have on the United States

Today, Congress continues to seek ways to reform PURPA, and the Federal Energy Regulatory Commission (FERC) has indicated an interest in considering reforms to its implementation of PURPA and has an open docket for stakeholders to offer public comment (Docket No. AD16-16). Utilities, state regulators, and developers have all called for various reforms to PURPA and its implementing regulations.

The push for reform

Utilities have asserted several developments that have made PURPA’s mandate unnecessary. These include the development of competitive wholesale markets, the robustness and frequency of their integrated resource planning (IRP) efforts, regulatory requirements to invest in or procure renewable energy resources, and cost declines in renewable generation.

Developers, meanwhile, argue that aspects of PURPA (including the obligation to purchase electricity output) have yet to be fully implemented by many states, and that the mandatory purchase obligation for renewable energy resources that meet PURPA criteria as Qualifying Facilities (QFs) is still necessary in many regions of the country. This is particularly the case in regions of the country with aggressive efforts underway to continue diversifying the fuel mix in electric generation and reducing greenhouse gas (GHG) emissions considering state energy and environmental policy goals. 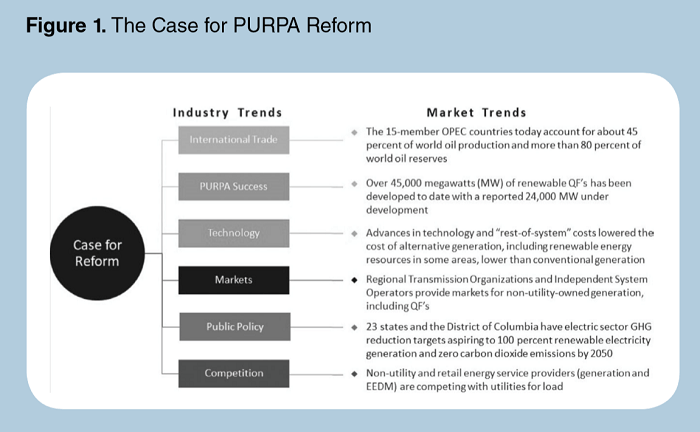 As shown in Figure 1, the push for PURPA reform is due in part to its success in reducing renewable energy technology and implementation costs, and increasing penetration levels of qualifying renewable energy resources in many parts of the country—often adding capacity under mandatory power purchase agreements (PPAs), at the expense of nonrenewable generation. By mandating utilities buy any power generated from qualifying renewable energy facilities in their service area, developers are better able to secure financing at more favorable terms. The PPAs with the utility can be for a fixed and/ or predetermined price, and for a specified term, whether such capacity or energy from the QFs is needed.

While some regions of the country operate under wholesale markets for electricity, and local distribution utilities do not own generation, QF developers currently have a choice of selling directly into the market or to a utility under a PPA. Some states have more favorable PURPA implementation rules and regulations than others, making PURPA reform difficult— as any such reform will benefit some and disadvantage others, including regions, utilities, developers, and customers.